The covid tracker that I made andwroteabout a couple of months ago had crashed without knowing that you should have an inbound firewall to Django, port 80 and 443.

For the past month, I've been recreating the app, finding APIs that can help users, and finding the perfect design system that would make the web app look professional and not like adeveloperwho designed it.

Browsing through my browser's bookmarks and the files on my mac, I stumbled upon theUSWDSfolder inside the Design-System folder of my Dev files and went on to find more about it onDuckDuckGo.

My side project went from this: 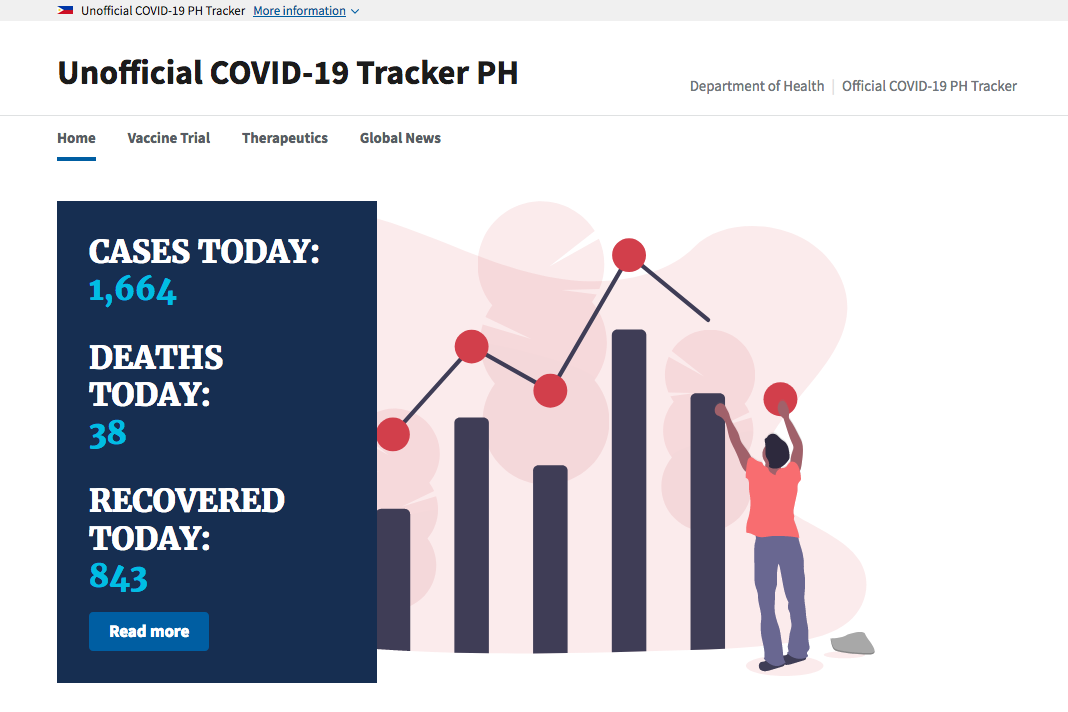 The API on theold sitewas no longer active, or it moved to a new domain. While looking for a much better, faster, and an API with more data than what I used in the old site, I stumbled upondisease.sh, which was the new site of the old domain. Realizing that it had a lot of useful data I could use on the site, I decided to also pull the COVID-19 vaccine trial and therapeutic trial data fromraps.org.

The APIs above return this JSON in chronological order:

The pulled data is not human-readable - no commas or decimal points for the numbers, and there are unwanted characters. This is wheredjango.contrib.humanizeand the built-in Django template tags and filter comes in handy. Watch: 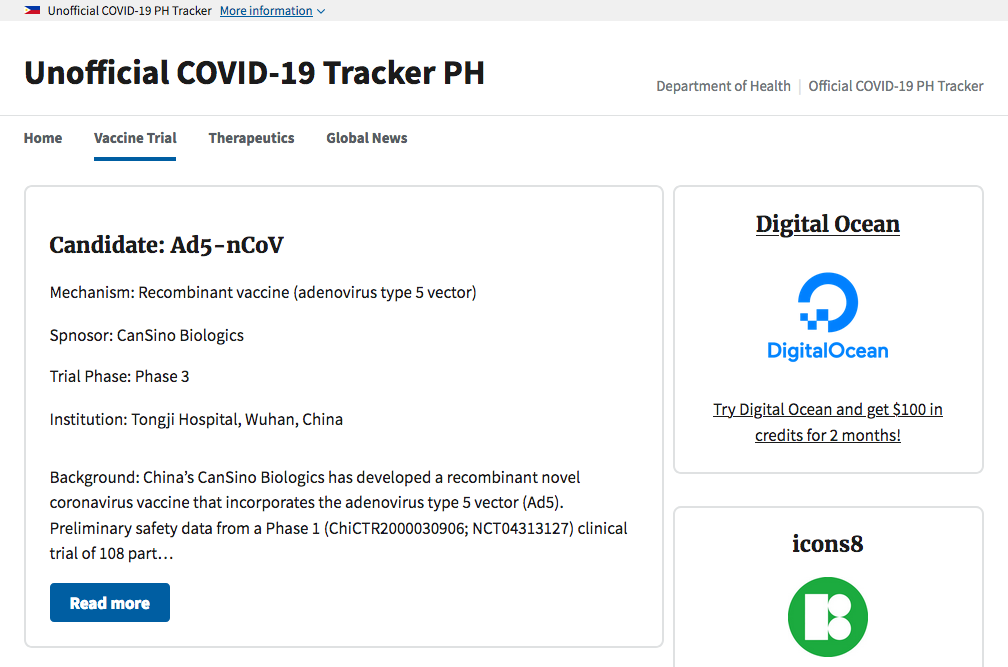 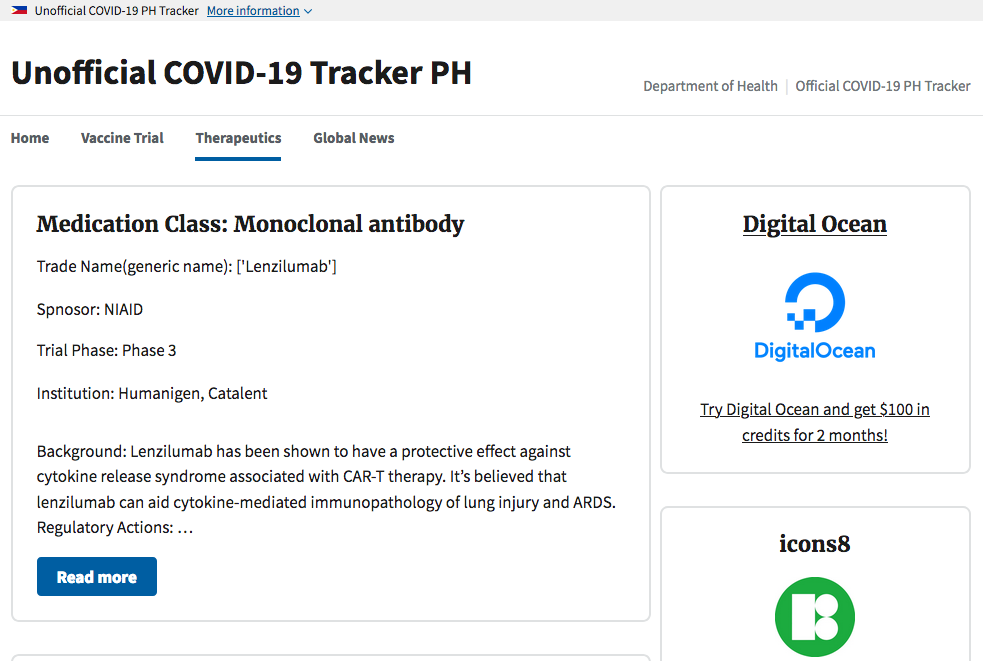 ThecutfilterRemoves all values of arg from the given string. I used this because{{ t.developerResearcher }},{{ v.sponsors }}and{{ v.institutions }}return unwanted characters.

To add oomph(sorry if this isn't the appropriate word, but I'm a musician, and I will forever add the word oomph to what I do) to the web app, I decided to scrape news related to COVID-19 using contextual web search's news API. 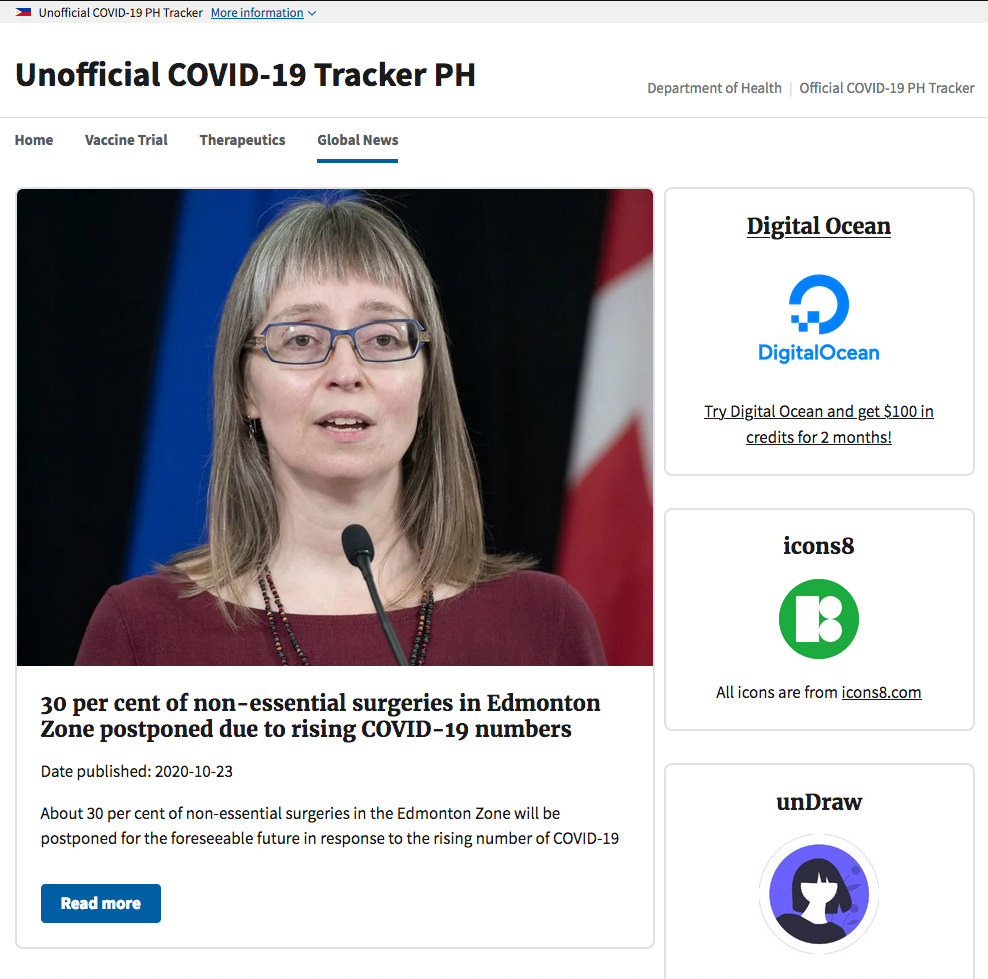 Finally, deploying a cookiecutter-django app in docker is not easy the first time I tried deploying an app. If you'd ask me what it is, it's my portfolio that's built on the same stack I used on this app except for the USWDS design system. Luckily, I found a greatresourceon how to deploy a dockerized cookiecutter-django toDigital Ocean(affiliate link).

On the app's performance based onperformance.sucuci.net's metrics, the time to first byte of the homepage returned 0.079. I don't know about you, but I don't know the definition of a fast web app anymore if this isn't fast for you.

What I learned while building the app.

I learned that deploying an app on Digital Ocean requires an inbound firewall on port 443, 80, and the port of your Django app for the app to stay online. This app's first deployment had crashed without knowing what I did wrong regardless of whether I had sentry installed.

What I want to change in the app.

The global news APIs latency is 2,286.7ms. It's super slow, especially in the Philippines, where a senator thinks our internet speed ispretty fast at an average of 3-5mbps(here's a shoutout to all the clients I've worked with. I'm sorry.)

Second, the homepage's pulled data returns zero at around 9am - 4pm GMT+8. I know there's a better API that I can use to get data to show on the web app.

Finally, testing. I have no tests in this web app. I will have to write another blog post for it soon.

You can view the new web app herehttps://covid19ph-unofficial.icvn.tech